Amazon Builds for Diablo 2 covers many popular and niche builds for the Amazon, one of the seven available Classes in the game. Amazon Builds in Diablo 2 usually use one of three Skill Lines to focus on, and those are: Bow and Crossbow Skills, Passive and Magic Skills, and Javelin and Spear Skills. Builds can of course dip into other Skill Lines, but they will usually focus around 1 or 2 Skills, increasing other Skills in those Skill Trees, since doing so generally passively increases the effectiveness of the main Skill you are focusing on. 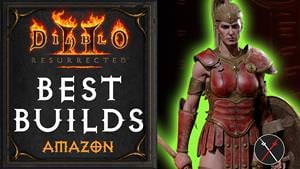 The Best Amazon Builds in Diablo 2 Resurrected. These Amazon Builds are extremely relevant in 2021, and perfect for your D2 Resurrected experience. Starting with our very own Plague Javelin Amazon Build, which is a Javelin focused Amazon Build that ranged down enemies with the Plague Javelin Skill, and working towards more end game focused Builds, you can find what you need on this page. This Build is a very good Leveling Amazon Build, as it works from relatively early on in the game, and can carry you through Normal with ease. If you're new to playing Amazon then this is a great choice for you!

The Infectious Javazon uses the Plague Javelin skill to throw poisonous projectiles to infect and kill Enemies. Poison damage is dealt over time, meaning that you will only need to connect one shot and then wait for your Enemies to die in a second or two.

The Amazon class can be a little tricky to play at first, as you will need to pay attention to the amount of Javelins at your disposal and kite Enemies effectively. But don't let this stop you from picking the Amazon, as you will get used to everything by the end of Act I.

If you are a new player I strongly recommend you to save the respec that you get from completing the first mission, called Den of Evil. If you do, you'll be able to talk to Akara and respec your character into a different build once you reach Nightmare difficulty.

Act 2 Mercenaries are the best choice for all Classes because of their Paladin auras and the ability to equip Polearms. This is very important, because many powerful Runewords can be created on them, providing various buffs or debuffing Enemies.

The Lightning Javazon is one of the highest DPS builds in Diablo 2 Resurrected. Using the Lightning Fury Skill to deal with crowds of enemies from a distance, and Charged Strike to deal with Bosses and Elites in melee combat, this build can clear any type of content in just a couple of seconds. This Diablo 2 Amazon Build is intended to be used for Nightmare and Hell difficulties.

You’ll want to get the Act 2 Holy Freeze Mercenary (from Act 2 Nightmare) for this build. The Holy Freeze Aura is great for dealing with large crowds of enemies.