Builds for Diablo 2 are an arrangement of a characters' Skills, Stats, and Equipment that define a specific set of playstyle or highlight a certain natural strength of character. Builds are created by users and as such their performance is varied, and should not be taken as a requirement or objective of the game.

Diablo 2 Best Builds guides you on how to create builds for all classes and all skill levels. Whether you need beginner character builds, advanced farming loadouts or detailed crafting guides for your Runewords, this list has the best possible combinations for single player, multiplayer, pvp, charm builds and even uber builds for the hardcore, speedrun and ladder-focused.

These fully updated Diablo 2 Resurrected Builds were made for the D2 Remaster of 2021, so you will find up-to-date and working equipment among these top builds. You won't need to use a build calculator and can rely on our leveling guide for all classes. We even provide build rank!

Tips for creating your own build: 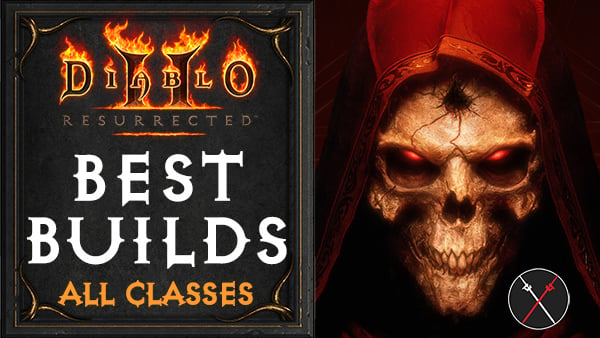 The Amazon is a versatile class that can easily adapt to several types of weapons thanks to her passive skills.  Regardless of your skill spread, there are three skills that are considered essential for any Amazon Build: Critical Strike (doubles attack damage), Avoid and Dodge

The Amazon stat spread is focused on Dexterity, which is the main damage attribute for Amazon Weapons, while also boosting hit chance and defensive evasion. Secondary attributes are Strength and Vitality.

The Asssassin is a martial class that attacks with Kicks and Claws, while also manipulating the environment to set up traps that trigger AoE effects on targets. Assassin's key skills include Burst of Speed, Claw Mastery and Tiger Strike.

The Asssassin stat spread is focused on Dexterity, which is the main damage attribute for Asssassin Claws, while also boosting hit chance and defensive evasion. Secondary attributes are Strength and Vitality.

The Barbarian is the strongest Class regarding pure and straightforward melee combat. His war cries can enhance his and his party, offensive or defensive capabilities, as well as reducing his opponents' or even make them flee in fear.

The Barbarian stat spread is focused on Strength, which is the main damage attribute for Barbarian Weapons. Secondary attributes are Dexterity and Vitality.

The Druid is a very balanced Class, it can be used as a fairly capable spellcaster or as a melee fighter.

The Druid stat spread can be differently according to the build you are pursuing. Both a Summoner Druid and an elemental Druid will sink more points into Energy, while a shapeshifter one will focus more on Strength and Vitality.

The Necromancer is arguably the most difficult Class to play in the whole game. If the Necromancer focuses in any one area, to the exclusion of another one, he may well find himself at a dead end. Poison and Bone spells are, perhaps, the most effective for the end-game, but are difficult to start the game with. Curses, on the other hand, can render a Necromancer a vital part of a team, but can be limiting in solo play.

The Necromancer stat spread is focused on Energy, which is the main way to sustain the mana-consuming gameplay a caster like the Necromancer has.  Secondary attributes are Vitality and Dexterity.

The Paladin is a skilled fighter as well as a proficient magic user. In a way, the Paladin is probably the best all-around Class.

The Paladin stat spread is focused on Strength, which is the main damage attribute for Paladin Weapons, while also boosting hit chance and defensive evasion. Secondary attributes are Vitality and Dexterity

The Sorceress is the most skill-dependent Class of all the available ones. She can access diverse trees that allow her to learn elemental spells based on Ice, Fire and Lightning.

The Sorceress stat spread is focused on Energy, which is the main damage attribute for casting, allowing the Sorceress to stay longer in the fight. Secondary attributes are Strength and Vitality. Strength should be leveled up to attain the desired armor, in order to be able to withstand at least a few attacks.