Barbarian is a Class in Diablo 2 Resurrected (Remastered). This Barbarian Class Guide covers all Barbarian Skills, Strategies, Suggested Builds and Equipment, as well as providing insight into the character's story and lore.

"A nomadic wanderer, the Barbarian combines brawn and ruggedness with a mastery of weapons, using devastating melee attacks along with war cries to boost his allies- or demoralize his enemies. The Barbarian, a member of any of several tribes on the fringes of civilization, rebuffs the influence of those he sees as soft and weak. Ceaseless clan warfare and the constant struggle to survive in the hostile wilderness are evident in the Barbarian's sturdy and powerful frame. Though perhaps lacking the sophistication of his civilized contemporaries, the Barbarian has an acute awareness of his surroundings. Because of his shamanistic belief in the animal powers with whom he identifies, the Barbarian is sometimes associated with stories of lycanthropy. In fact, he believes that he can improve his superb battle tactics by calling upon the totemic animal spirits to infuse him with supernormal strengths and abilities"

The Barbarian is the strongest Class regarding pure and straightforward melee combat. His war cries can enhance his and his party, offensive or defensive capabilities, as well as reducing his opponents' or even make them flee in fear.

The Barbarian stat spread is focused on Strength, which is the main damage attribute for Barbarian Weapons. Secondary attributes are Dexterity and Vitality.

The Equipment choices for the Barbarian are Strength-based Weapons. Given their initial high Strength level, the Barbarian can access almost all kind of Weapons, even massive two-handed ones.

Legend says that when the world was very young the tribes of the Northern Steppes were given a sacred charge. Somewhere deep within the great mountain, Arreat, lies a source of great power, crucial to the well being of all humanity. The tribes were tasked to act as guardians of this artifact. They have shaped their way of life in observance of this power and fulfilling their sacred duty.

Steeped in mystery and tradition, these people refer to themselves as the "Children of Bul-Kathos," the great and ancient king. To better protect their lands from outside forces, they adopted a nomadic lifestyle, frequently moving within the confines of the Steppes and maintaining few permanent settlements. Isolating themselves from the world outside their territories, they eschew the use of magics and complex machinery, as they believe these things can only weaken their resolve developed over so many years.

The Children of Bul-Kathos have developed a kinship with the land and have learned to harness the primal energies within nature to enhance their own substantial physical prowess. It is because of this, together with their freedom from the trappings of the outside world, that the Western Kingdoms have historically referred to these tribes as "Barbarians," an epithet that belies the rich cultural and spiritual history these people truly possess. Although some trade with these curious bands of nomads, they do so only along the outermost borders of their lands. All intrusions into the territory surrounding Mount Arreat are forbidden, and warriors from the northern tribes are quick to thwart any incursions. Every foreign attempt at conquest has been met with fierce and decisive resistance. 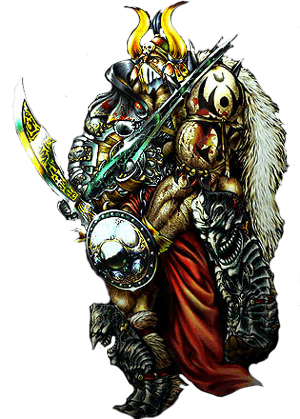 An account of one skirmish recounts how hordes of Barbarian tribesmen silently appeared where none had been but moments before. Their bodies painted in mysterious designs and their faces howling as they charged like the fierce mountain winds, the tribesmen descended on the invaders. Fully half of the trespassing army immediately dropped their weapons and fled, the remainder were set upon by the Northmen with fervor that none of the battle-hardened invaders had ever witnessed. No mercy was asked and none was given, but in the end, when the outlanders sounded a full retreat, no chase was given either… at least none that could be observed.

Since news of Diablo's re-emergence has spread, a small number of Barbarian warriors have begun roving the lands outside the Steppes, prepared for war and seeking information regarding the recent activities of the Prime Evils.

Traits and Abilities
Renowned for their awesome combat prowess as well as their arrogant demeanor, the Barbarians appear to be perpetually girt for battle. Through harsh conditioning, the Barbarians excel in physical combat and tremendous feats of strength. They derive their power chiefly through intense physical training, but they also tap primal energies from the living world around them. They can manifest these or add to their already considerable catalogue of superhuman feats of strength and power.