Sorceress is a Class in Diablo 2 Resurrected (Remastered). This Sorceress Class Guide covers all Sorceress Skills, Strategies, Suggested Builds and Equipment, as well as providing insight into the character's story and lore.

"Commanding the elements, the learned Sorceress dispatches enemies from afar with calculated blasts of fire, cold, and lightning spells - invaluable skills against the armies of the Burning Hells. A rebellious woman who has wrested the secrets of magic use from the male dominated Mage-Clans of the East, the Sorceress is an expert in mystical creation ex nihilo. Though somewhat lacking in the skills of hand-to-hand combat, she compensates for this weakness with fierce combative magic for both offense and defense. Solitary and reclusive, the Sorceress acts based on motives and ethics inscrutable to most, and sometimes seems capricious and even spiteful. In reality, she understands the struggle between Order and Chaos all too clearly, as well as her role as a warrior in this battle."

The Sorceress is the most skill-dependent Class of all the available ones. She can access diverse trees that allow her to learn elemental spells based on Ice, Fire and Lightning.

The Sorceress stat spread is focused on Energy, which is the main damage attribute for casting, allowing the Sorceress to stay longer in the fight. Secondary attributes are Strength and Vitality. Strength should be leveled up to attain the desired armor, in order to be able to withstand at least a few attacks.

The Equipment choices for the Sorceress are Energy-based weapons, specially those that restore Mana Regeneration. Most Sorceress builds benefit from items with Mana Steal, as they will allow you to be able to keep casting spells during the heat of battle.

These are the breakpoints to reduce the Cast Rate animation time in frames, by increasing the Faster Cast Rate. Lightning and Chain Lightning have independent Breakpoints.

The female mage clan of Zann Esu is one of the oldest of the ancient clans, although little is actually known about them. Centuries ago, the fourteen powerful covens of Esu witches convened for the first time in generations. What they discussed is not known, but the witches left behind their former lives and, as a group, disappeared into the Eastern jungles.

The exact location of their community is a mystery. Until recently, their only contact with the outside world occurred during the recruitment missions. Once every seven years, the Zann Esu visit certain families across Sanctuary. These families have only one thing in common - they each have a seven-year-old daughter. Always good-natured and polite, the Zann Esu visitors meet the gquestions and then leave. A select few of the girls are visited a second time and offered apprenticeships. The families of those chosen enjoy good fortune for many years.irls, ask a few 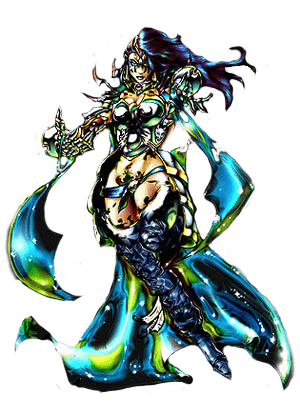 The Zann Esu, or Sorceresses as they are generally known, are on a quest for the "perfect" magic in its purest form. They feel that the other disciplines of magic are haphazard, and have instead chosen to focus strictly upon elemental magic. They mold the base elements into whatever magical forms they need - threatening all other magic disciplines with obsolescence. In order to achieve perfection in these elemental transmutations, they choose only those daughters of Sanctuary with the highest level of attunement to the magical elements.

The Sorceresses believe that it is through the search for perfection that they will attain ultimate purity and ascend to their destined role as the most powerful mages in Sanctuary. For centuries, they have studied in secret, perfecting their art and biding their time until the Emergence of Evil. Then, they will face their greatest challenge, either proving the purity of their magic or fading from existence.

The Zann Esu oracles have decreed that the time of the Emergence is at hand. The destruction of the Prime Evils is to be the great test of their clan. Recently, Sorceresses have appeared mysteriously throughout Sanctuary to do battle with the minions of Evil wherever they are found.

Traits and Abilities
Athletic, affable, and self-assured, Sorceresses hardly seem like scholarly bibliophiles hidden away from civilization. Sorceresses possess many of the same skills as the male members of the Eastern mage clans, but excel at the use of Elemental magic. Like most mages, they consider melee combat vulgar, and use magic almost exclusively to fight their enemies.