Amazon is a Class in Diablo 2 Resurrected (Remastered). This Amazon Class Guide covers all Amazon Skills, Strategies, Suggested Builds and Equipment, as well as providing insight into the character's story and lore.

"A master of the javelin and bow, the Amazon reacts to combat situations with superhuman agility. She relies on magic prowess to enhance her significant martial abilities. This powerful woman warrior belongs to nomadic bands who roam the plains near the South Sea. The wandering of these groups often brings them into conflict with other peoples, so the Amazon is accustomed to fighting to defend her own. This lifestyle has made her fiercely independent and able to weather severe hardship and travel. While her skill with the bow rivals that of the Rogues, the Amazon is also adept in the use of spears and other throwing weapons, as well as in hand to hand combat. The Amazon is much sought after as a mercenary, in which type of service she will be loyal as long as her own ends are also served. "

The Amazon is a versatile class that can easily adapt to several types of weapons thanks to her passive skills.  Regardless of your skill spread, there are three skills that are considered essential for any Amazon Build: Critical Strike (doubles attack damage), Avoid and Dodge

The Amazon stat spread is focused on Dexterity, which is the main damage attribute for Amazon Weapons, while also boosting hit chance and defensive evasion. Secondary attributes are Strength and Vitality.

The Equipment choices for the Amazon are dexterity-based weapons. One may select Bows, Spears, Javelins or a magic path. Most Amazon builds benefit from items with Mana Steal, as they will allow you to use your skills more frequently.

These are the breakpoints to reduce the Block animation time in frames, by increasing the Faster Block Rate. The Breakpoints for the Amazon when she's wielding One Handed Weapons are independent.

These are the numeric values for the amount that each potion restores by consuming it. 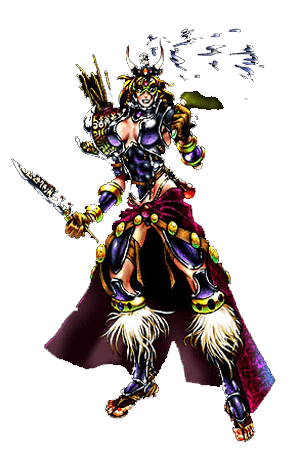 The Amazons are women warriors who hail from a group of islands in the Twin Seas, near the border of the Great Ocean. Only the permanently snow-covered peak of Mount Karcheus breaks the expanses of lush forests on the islands.

The Amazon people are a relatively isolated culture. Adapting over the centuries to their tropical milieu, they have built magnificent cities in the forest canopy. These cities are an architectural phenomenon and a source of great pride to the Amazon people. They do not follow the teachings of the Zakarum, but instead practice a polytheistic religion that adheres to the strict principles of Order. Their oracles long ago predicted the Dark Exile, and they have been preparing to combat it ever since. Amazons regard the destruction of the Three Prime Evils as their destiny, ushering in a new era when mortal men and women can at long last take their rightful place in the universe, no longer merely playthings for the beings of the Outer Realms.

The Amazons are a seafaring people, one of the first to have made trade contact with both the Kingdoms of the West and with Kejhistan in the East. Their prominence in the world's trade establishment has afforded their warriors the reputation they currently enjoy as cunning strategists and skilled combatants. They are much sought after as mercenaries, being both expert soldiers as well as extremely loyal - as long as the assignment does not conflict with their strict sense of ethics. 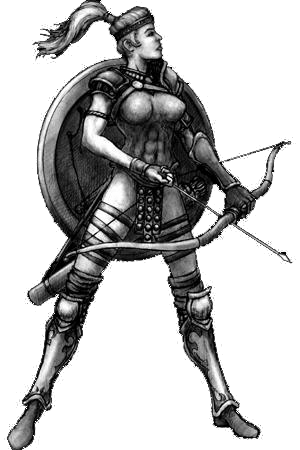 Their pantheon of gods consists of a well-defined hierarchy, each member upholding some segment of the balance of Order. It is this strong sense of order that drives the Amazon people to achieve greatness in even the smallest of their endeavors. Their prime deity is Athulua who, with her consort, Kethryes, rules over the seasons and the weather. Under these Goddesses are a wide assortment of lesser deities, each responsible for his or her own sphere of influence among the Amazon people's daily life. The Amazons believe this pantheon is the remnant of the original inhabitants that settled the islands centuries ago. According to ancient records, they share the same names as these gods, although aspects of their personalities seem to have evolved over the centuries.

In the Amazon culture, only the women serve as warriors, their intrinsic superior dexterity and lithe body structures are better suited to combat in the dense rainforest environs of the islands. Their society is far from stratified, however, as men are responsible for any number of positions in the community, government, and clergy, as well as merchant and agricultural occupations.

While more than competent in hand-to-hand combat, training in the jungles of her native islands has shaped the Amazon's skill with the bow and missile weapons into one of unparalleled excellence. With the bow, her only rivals are the Sisters of the Sightless Eye. But, unlike her sisters in arms, the Amazon is also highly adept in the use of spears and other thrown weapons. The powers they possess are a combination of Prime magic, Holy magic and ingenious weapon construction.