Asssassin is a Class in Diablo 2 Resurrected (Remastered). This Asssassin Class Guide covers all Asssassin Skills, Strategies, Suggested Builds and Equipment, as well as providing insight into the character's story and lore.

"The Assassins are an ancient order originally founded by the Vizjerei to hunt down and eliminate rogue mages within their own ranks. Employing secret disciplines to combat and resist the magical abilities of their elusive quarry, the Assassin's bag of tricks includes traps and other infernal devices, martial arts, and powerful mental abilities. Common people know nothing of the Assassins, but they are widely feared and respected by all who employ the magic arts. "

The Asssassin is a martial class that attacks with Kicks and Claws, while also manipulating the environment to set up traps that trigger AoE effects on targets. Assassin's key skills include Burst of Speed, Claw Mastery and Tiger Strike.

The Asssassin stat spread is focused on Dexterity, which is the main damage attribute for Asssassin Claws, while also boosting hit chance and defensive evasion. Secondary attributes are Strength and Vitality.

The Equipment choices for the Asssassin are dexterity-based weapons. One may select Bows, Spears, Javelins or a magic path. Most Asssassin builds benefit from items with Mana Steal, as they will allow you to use your skills more frequently.

In the third century, two brothers rose to dominance from within the ranks of the Vizjerei clan of mages; their names were Horazon and Bartuc. Both were equally powerful and ambitious, and both were fascinated by the power one could obtain through the practice of Demonic Magics; however, the two differed in their views regarding how best to study demons. While Horazon viewed demons as a great source of power, he felt that in order to use that power best, you must harness a demon and bend him to your will. 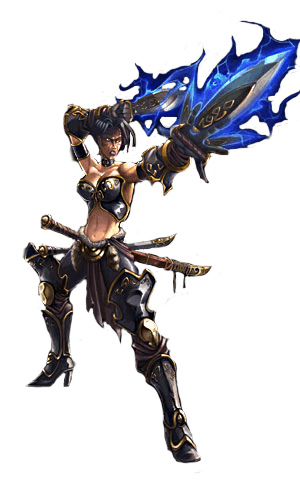 His brother, on the other hand, grew to sympathize with the demonic powers and felt (with no small influence from the demons) that the demonic forces were best understood by allying with the Hellish authorities so their secrets could be shared freely, and that is exactly what he did. Their diametrically opposed philosophies caused a great schism that split the ranks and tore the Vizjerei clan apart.

When at last their fierce rivalry culminated in inevitable violence, the combatants learned too late that they had both been played as pawns by the demonic host. The ensuing battle was so great it set the very firmament aflame, and when it was complete and the stillness of remorse was all that remained, Bartuc lay dead, Horazon had vanished into self-imposed exile, and the Vizjerei had learned a costly lesson. The small surviving group of sorcerers, the remnants of the once-great Vizjerei clan, resolved forevermore to spurn Demonic Magics and set about renewing their studies in the Elemental Magics. To further ensure that a similar tragedy could never happen again, they formed a secret order whose sole purpose was to police the mage clans, destroying corruption wherever they found it. This was the birth of the Viz-Jaq'taar, the Order of the Mage Slayers-otherwise known as the Assassins.

Knowing that such an order might itself be corrupted if exposed to the power of magic, the Vizjerei deemed it of the utmost importance that these Assassins maintain the purest, most focused minds. They should live in meditation and draw their power from within, not from external forces that could easily mask demonic interference. To this end, the Order would not employ the magic arts directly; rather, they would use ingenious devices and enchanted items to battle those possessing great magical powers. To further their campaign against demonic corruption, they concentrated on honing the natural martial abilities of their bodies, both physical and mental.

Because the Order remains veiled in secrecy, few people, even among the mages, know more than rumors about this mysterious organization. Their reputation has been one shrouded in ambiguity. Legends of their stalwart vigilance, and the widespread fear of their retribution, have kept many mages away from the temptations of corruption, so actual sightings have been rare. However, with the reemergence of the Three, and the subsequent increase in demonic manifestations in the world, the Order has shown a greater public presence of late.

Assassins do not employ the magic arts directly; rather, they use enchanted items that mimic elemental powers, which can function autonomously. To further avoid potential corruption, they also focus on the natural abilities of the mortal body-powers of the mind and unarmed combat. The Assassins have trained extensively in the use of an exotic group of weapons: sets of metal blades and claws that strap onto the wrists. They have expertly incorporated the use of these weapons into their martial arts, and when wielding one in each hand, an Assassin can deliver a devastating double attack. Even the most novice of Assassins is a past master of infiltration, and no lock has been made that they cannot circumvent. Hence, an Assassin needs no key to open locked chests.