Paladin is a Class in Diablo 2 Resurrected (Remastered). This Paladin Class Guide covers all Paladin Skills, Strategies, Suggested Builds and Equipment, as well as providing insight into the character's story and lore.

" A Paladin's faith is his weapon and his shield. Exuding powerful auras, the Paladin combines martial prowess with protective enchantments to redeem the land and send demons back to the abyss. The Knights of Westmarch who felled the armies of mighty Leoric are pure at heart and closely follow the teachings of Zakarum, the Religion of the Light. A battle-ready warrior for whom faith is a shield, the Paladin fights for what he believes to be right. His steadfastness gives him powers to bestow blessings to his friends and wreak cruel justice on foes. There are those who call the Paladin an overwrought zealot, but others recognize in him the strength and goodness of the Light. "

The Paladin is a skilled fighter as well as a proficient magic user. In a way, the Paladin is probably the best all-around Class.

The Paladin stat spread is focused on Strength, which is the main damage attribute for Paladin Weapons, while also boosting hit chance and defensive evasion. Secondary attributes are Vitality and Dexterity

The Equipment choices for the Paladin are Strength-based weapons. One-handed Weapons can allow the Paladin to also wield a Shield, which is important for both blocking and granting a higher armor rating.

These are the breakpoints to reduce the Block animation time in frames, by increasing the Faster Block Rate. Holy Shield has independent Breakpoints.

These are the breakpoints to reduce the Hit Revocery animation time in frames, by increasing the Faster Hit Recovery. The Breakpoints for Paladins wielding Spears and Staves are independent. 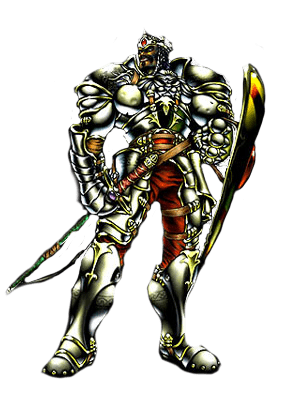 During the mid-twelfth century, after the Church of Zakarum had gained prominence in the East, the Church decreed that the visions of Akarat would be spread throughout the known world in order to redeem the masses. Thus, the Church selected a group of its most charismatic and devoted priests and sent them on a mission to proselytize the people of the West.

Unfortunately, the Church had not prepared these men for the rigors of travel nor the hazards of the world. The priests who survived their missions recounted tales of harsh weather, inadequate supplies, attacks from bandits and even encounters with horrible monsters. To ensure the success of future missions, the Church set about training holy warriors, Paladins, to accompany and safeguard their missionaries. In practice, these "Protectors of the Word" proved to be more successful at converting the native peoples than the Priests that they were assigned to defend. Impressing the locals with daring deeds, powerful weapons, and martial prowess was far more convincing than the condemnations of a soft-spoken monk. However, once the Word had been spread to every major city of the West, the "Protectors of the Word" faded from public view.

Some decades later, Paladins were again called into service. During the height of the Time of Troubles, the Church commenced a second campaign of conversion. This time, however, the inconvincible were deemed evil. The Zakarum Inquisition spread through the lands like a tempest, laying waste to all suspected of demonic possession or corruption. Leading this crusade was a new generation of Paladins, known as the "Hand of Zakarum." These cavaliers of righteousness swept through the lands, expunging the taint of demonic contamination wherever they found it.

In the midst of this bloody crusade, a rebellion arose within the ranks of the Paladins of Zakarum. The rebels condemned the methods of the Inquisition, proclaiming that the new Order of Paladins should protect the innocent, and that the evil corruption was rooted in their forebear's failure. They resolved to fight the true source of corruption, the Three Prime Evils - Diablo, Baal and Mephisto. And so, these rebellious Paladins left their Zakarum brethren and ventured west.

Traits and Abilities:
Paladins use holy magic as gifted by the High Heavens. They maintain strictly ordered lives, constantly upholding the cause of Virtue and Light. They must never succumb to worldly temptations lest they risk being deceived into following "false lights" - demons masquerading as Heavenly beings.

Paladins may use their skills to increase their prowess with sword and shield, as well as cast blessing "Auras" on themselves and to any who join them. They are particularly skilled against the undead, as they know many holy incantations effective against these types of creatures.