Druid is a Class in Diablo 2 Resurrected (Remastered). This Druid Class Guide covers all Druid Skills, Strategies, Suggested Builds and Equipment, as well as providing insight into the character's story and lore.

"A keeper of the wilds, Druids can shapeshift into vicious werewolf and werebear forms, command animal companions, and release primal spells of earth, fire, wind and cold to catalclysmic effect. The Druids are a race of nomadic warrior-poet-kings. Driven from their homelands long ago by their Barbarian brothers, the Druid tribes live primarily in the northern forests. Using mystic secrets passed down through the generations, they summon the elements of fire and wind to do their bidding, and command the creatures of the forest to aid them in battle. Shifting from their human forms into that of wild beasts, gives them abilities far beyond those of other mortals."

The Druid is a very balanced Class, it can be used as a fairly capable spellcaster or as a melee fighter.

The Druid stat spread can be differently according to the build you are pursuing. Both a Summoner Druid and an elemental Druid will sink more points into Energy, while a shapeshifter one will focus more on Strength and Vitality.

These are the breakpoints to reduce the Cast Rate animation time in frames, by increasing the Faster Cast Rate. The Human, Werebear and Werewolf forms have independent Breakpoints.

These are the breakpoints to reduce the Block animation time in frames, by increasing the Faster Block Rate. The Human, Werebear and Werewolf forms have independent Breakpoints.

These are the breakpoints to reduce the Hit Revocery animation time in frames, by increasing the Faster Hit Recovery. The Human, Werebear and Werewolf forms have independent Breakpoints, and also, when the Druid is wielding One Handed Swinging Weapons, the Breakpoints are also independent.

OHSW is for One Handed Swinging Weapons. 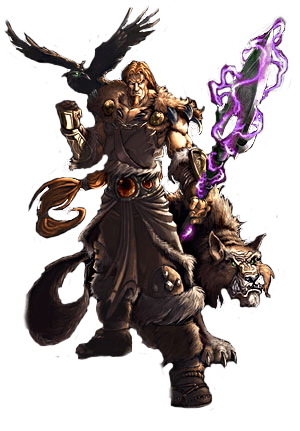 In the ancient tome of the Druids, the Scéal Fada, it is written that Bul-Kathos, the great and ancient king of the Barbarian tribes, had a mysterious but trusted confidant, who was only referred to as Fiacla-Géar. This man is sometimes described as Bul-Kathos's close friend, and at other times, he is referred to as his brother. Whatever the source of their relationship, their bond was strong, and together they shared the secrets of the ancients: of the mysteries below the peaks of Mt. Arreat, of the venerated task put to their people to protect those mysteries, and of the prophecies regarding the dark times ahead. They both agreed that, in order to fulfill their sacred trust, their people must devote themselves to nothing save that charge. However, they disagreed on exactly how the people could best do this. Bul-Kathos believed that only by bringing the tribes together and training them in strict martial discipline could the tribes faithfully concentrate on their goal for generations to come. Fiacla-Géar, on the other hand, believed that only through obtaining a spiritual oneness with the land they had sworn to protect could the people truly appreciate the importance of their role. Both agreed the other's philosophy had merit, and so around the time Bul-Kathos united the tribes, Fiacla-Géar gathered together a small group consisting of the tribes' greatest warrior-poets and shamans and mysteriously retreated into the forests surrounding the area known as Scosglen. There he and his people created the first of the Druid Colleges, huge mortar-less stone towers, covered in vines and safely hidden beneath the leafy canopies of the dense forests. They have dwelt there ever since, forging a new way of life for themselves. They created a new culture and language, cutting themselves off from their Barbarian cousins and their ways, vowing not to return to the Steppes of Mt. Arreat until the time of the Uileloscadh Mór, the final battle between the men of the world and the demons of the Burning Hells.

Here, in preparation for the impending conflict, he taught his people the Caoi Dúlra, a way of thinking that holds harmony with the natural elements of the world, its plants and animals, as the heart of its most intrinsic beliefs, for they are the personification of the very world that the Druids have sworn to protect. Not only was Caoi Dúlra the basis for their system of values, but through its study and practice, the Druids learned to bond with the natural entities of Sanctuary. This bonding was so absolute that eventually they discovered how to talk to the plants and animals, and these beings taught them all the secrets of the natural world. They taught them methods to call animals from far away, how to summon sentient plants from the earth, ways to change their own forms to share the strengths of their animal cousins, even, to a limited extent, techniques to control the weather.

At the Túr Dúlra, the greatest of the Druid Colleges, stands the magnificent oak Glór-an-Fháidha. This tree is the most revered source of the Druids guidance and teachings. Under its branches, for centuries, the Druids of Scosglen have been honing not only their powerful arsenal of natural magic, but also the martial skills they have retained from their Barbarian forefathers. They have done this because they believe themselves to be the world's last line of defense when the time of the great conflict comes, a time they believe is at hand. Lashing out in fury at the recent insurgence of denizens of the Burning Hells, and at the Leathdhiabhala, demonic corruptions of the very creatures they have vowed to defend, the Druids have, at last, emerged from their forests, marching toward their final stand against the minions of Chaos.

The Druids shun the use of traditional magic, or Dubhdroiacht, as they call it. They instead practice a form of magic based in their close bond to nature. Through this intimate kinship with the world of Sanctuary, a Druid has the power to command fire, earth, and the winds. He is a friend to the animals of the wilds and can call upon them to aid in his struggle. He can also use his heightened rapport with the animals to change the shape of his own body, drawing on the strengths and abilities of his woodland companions to better serve their cause.